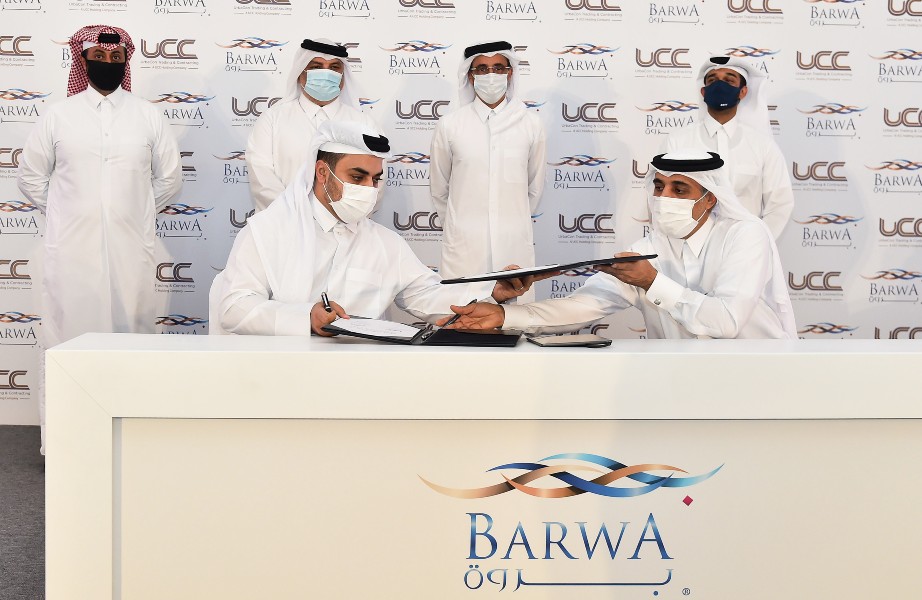 The Barwa Real Estate (BRE) on Sunday launched two residential projects — one for families and the other for workers — worth more than QR5 billion in the heart of Al Wakra.

The company has signed a deal with UrbaCon Trading and Contracting (UCC) for the construction for the projects, named ‘Madinatna’ for families and ‘Barahat Al Janoub’ for workers.

The construction works for the projects were launched on Sunday at the site of Madinatna, in the presence of Minister of Culture and Sports and Chairman of Barwa Real Estate HE Salah bin Ghanem Al Ali, Secretary General of Supreme Committee for Delivery and Legacy Hassan Al Thawadi and Public Works Authority (Ashghal) President Dr Eng Saad Bin Ahmad Al Muhannadi.

Following the agreement signing, HE Ghanim Al Ali, Thawadi, and Muhannadi took a tour of a furnished flat mock-up in the ‘Madinatna’ project.

The Madinatna plan features multi-storeyed residential buildings (G+4 and G+4+penthouse), with designs inspired by the traditional Qatari architecture and equipped with the latest smart city technologies.

The strategic location of Madinatna in Al Wakra’s Umm Besher will benefit users significantly in terms of connectivity as it is located on the G-Ring Road, which connects the area to the southern regions, Industrial Area and the highways including Al Majd and Sabah Al Ahmad Corridor.

It also provides easy access to the Hamad International Airport via the Umm Lekhba Intersection on Al Shamal Road.

Moreover, the proximity of Madinatna to the Al Wakra Metro Station, the Free Zones Metro Station and a number of public bus service lines add to its advantages.

The project site is also located close to the Al Thumama Stadium and the Al Janoub Stadium, which will host some of the FIFA World Cup 2022 matches.

The retail outlets and other services in Barwa Village will also serve the project due to the close location of the two cities. Mesaimeer City, Masaken Mesaimeer, Al Wakra Hospital and all recreational facilities in Al Wakrah City, including the beaches and the parks, lie in close proximity to the project location.

This residential project of Barwa seeks to provide a fully-integrated city for workers in Al Wakrah City, following the highest international standards.

The project extends over 773,457 square metres, with a design inspired by Arab homes with courtyards. It will feature 1,404 units in various multi-stories buildings (G+2), equipped with smart city technology, offering 16,848 rooms each accommodating up to four persons.

The project is located next to Al Wakra Central Market on Mesaieed Road, and is distinguished by its proximity to important developmental projects and sustainable facilities such as Al Wakrah Logistics District, Umm Al Houl Free Zone, Hamad Port, and Hamad International Airport, in addition to its proximity to sports facilities in Al Wakrah City.

Moreover, Barahat Al Janoub is connected to the highway network which adds value to this distinctive location of the project and provides extra privilege for companies looking to accommodate their workers in such integrated city.

Commenting on the projects, Barwa Group CEO Abdulla bin Jobara Al Romaihi said: “Madinatna and Barahat Al Janoub will provide residential communities with designs inspired by traditional Qatari architecture and equipped with the latest smart city technologies. These modern, sustainable residential cities developed by Barwa will provide innovative solutions and services to different segments of the Qatari community, with residential environments that meet the highest standards and specifications, required by the local market for residentialhousing and maximising shareholders’ returns”.

Ramez Al Khayyat, Managing Director of UCC, expressed his gratitude to Barwa in placing their confidence in UCC, and confirmed the company’s dedication towards executing these projects on time and with the highest safety and quality standards.